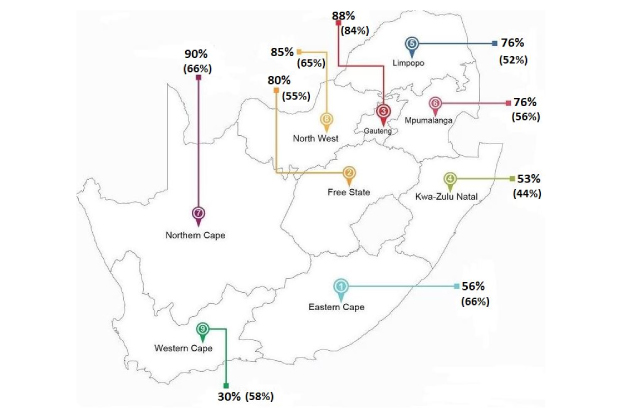 The recent update for the week ending 14 August 2017 shows that Western Cape province’s dams averaged 30%, which is a 2% improvement from last week, but 28% below the same period last year. Fortunately, the Northern Cape and Free State provinces, which are mostly irrigated are in good shape with dam levels over 80% full.

The wheat crop in many parts of the Western Cape province is in a fair condition following last week’s rainfall. However, there is a need for follow-up rains due to lower soil moisture. The recent showers were not sufficient to replenish the soil moisture.

Most parts of South Africa have already completed the harvest process. The ones that have not yet finished could get momentum from the expected drier and cool weather conditions within the next two weeks.

The domestic soybean data calendar is fairly light this week with SAGIS monthly data due for release at midday on Friday. This will give an indication of the current stocks levels, monthly soybean consumption, as well as imports and exports data.

Similar to soybeans, this week’s calendar in the South African sunflower seed market is light with one key data release on Fridaymidday. SAGIS will release monthly stocks, consumption, and trade data. Overall, the market will most likely be driven by the currency movements and traded volumes.

The South African potatoes market saw marginal gains in Friday’s trade session with the price up by 0.56% from the previous day, closing at R28.93 per pocket (10kg). These gains came on the back of relatively lower stocks in the market.

The SAFEX beef market has not shown any notable movements this month due to thinly traded volumes. The price remains flat at R46.00 per kilogramme. This means that the SAFEX beef carcass prices could differ from the physical market prices.