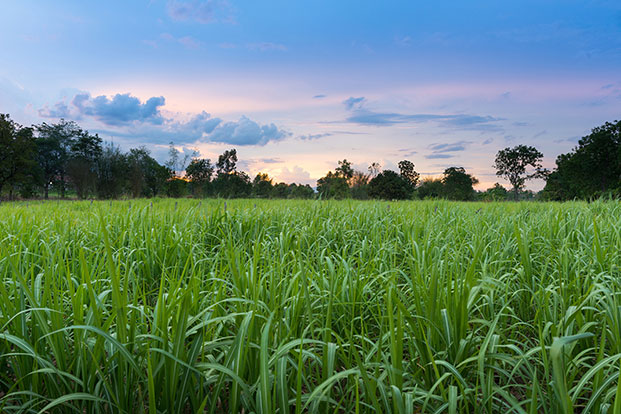 When irrigation water is very scarce, do you (a) spread the limited water as widely as possible over your sugar cane lands to ensure crop survival, or (b) apply more water to fewer lands to ensure at least some good yield? Whatever you decide will have a profound effect on production and profitability, says Dr Abraham Singels, principal agronomist at the South African Sugarcane Research Institute (SASRI). Singels and his colleagues Aresti Paraskevopoulos and London Mashabela have been developing a method to predict the effect of different irrigation strategies on sugarcane yield and profit.

As part of this research and development, SASRI scientists used irrigated sugar cane operations in Mpumalanga’s Inkomati catchment as case studies. The three main sources of surface water for irrigation here are the Lomati, Komati and Crocodile rivers. “We engaged closely with sugar cane farmers and millers, extension officers, agricultural economists from the SA Canegrowers’ Association, and Water Board representatives in the area to get the information needed, and to obtain their feedback on our progress,” explains Singels.

Sugarcane irrigation in the Inkomati catchment is applied by overhead centre pivots and drag-line sprinklers, and via surface and sub-surface drip irrigation systems. Average annual rainfall is about 600mm, but this is significantly exceeded by average annual evapotranspiration losses of about 1 500mm. In fact, the region experiences a water deficit every month of the year due to evapotranspiration exceeding effective rainfall. This means that irrigation water supply is often limited in the Inkomati catchment. “Sugarcane irrigation requirements often exceed the water allocation for eight consecutive months annually, particularly in September and October,” says Singels.

This was exacerbated by the severe drought of the 2015, 2016 and 2017 production seasons. Eastern Mpumalanga’s surface water supply for residential, industrial, agricultural and environmental needs came under so much pressure during this period that local water authorities were forced to severely limit allocations to farming for about 24 months.

The frequent water supply problems in the Inkomati catchment, which began even before the drought, led to the development of the Sugarcane Water Optimisation Programme (SWOP) aimed at helping South Africa’s irrigated sugar cane farmers use water more efficiently, particularly in times of drought. SWOP, which makes use of Microsoft Excel, comprises three interacting components: the crop simulation model, the irrigation module, and the gross margin calculator.

This uses daily weather data and field information to simulate the soil water balance and crop growth of sugar cane lands. The model predicts the future status of each land, as well as the expected cane yield and sucrose content at harvest for the current and next season. It is based on SASRI’s world-renowned Canesim simulation model, adds Singels. The model simulates detailed aspects of a sugar cane crop’s development and growth through its various growth stages, namely bud germination and shoot emergence, tillering, stalk growth, and maturation/drying off. It takes into account ratoon yield decline, cultivar yield potential, and soil and crop health.

The following data for each sugar cane land needs to be entered into SWOP:

Finally, the survival priority for each sugar cane land on the farm must be indicated.

During dry periods, other options that can be explored with the module include:

The third component of SWOP, the gross margin calculator, utilises financial information on production costs and income to calculate the gross margin that a farmer can expect for each land when it is harvested and sent for milling. Production costs that need to be entered into SWOP’s gross margin calculator include costs for planting, soil tillage, fertilising, weed and disease control, soil and leaf analyses, chemical ripening, the capital cost of irrigation systems, and the running costs of water, electricity and labour for irrigation. The cost of harvesting crops destined for milling, together with the cost of transporting the cane from farm to mill, must also be entered.

“SWOP provides predictions of irrigation applied, crop status (dead or alive), cane yield and sucrose content, recoverable value yield at harvest for each land for the current and next season,” says Singels. “Estimated production costs and gross margins are also given for each land and the farm as a whole for the current and next season. This information allows the farmer to explore the impacts of different irrigation strategies on crop growth and farm profitability during a drought.”

These strategies include the different soil water thresholds of 60%, 30% and 20% for triggering irrigation to be applied during the different crop growth stages, and delaying irrigation or reducing irrigation amounts in order to maximise the area irrigated. “Low-potential lands can also be sacrificed to enable normal irrigation on a smaller area,” adds Singels.

Key findings of the case studies

Some important lessons were learnt during SWOP’s development and application in the case studies. The first was that it is essential to top up the soil water content after harvesting to ensure successful establishment of the next ratoon.

Instead, under severe water restrictions, it was more cost-effective in the short-term to abandon low-potential sugarcane lands and allocate more water for irrigating higher-potential lands. “The problem is that future income is sacrificed and it will take some time and expense to rehabilitate the abandoned sugar cane lands once water allocations are restored.” SWOP provides quantitative information on aspects of farm productivity and profitability that will enable the farmer to make an informed decision on the best irrigation strategy for the existing situation.

According to Singels, SASRI is in the process of fine-tuning the software and further testing. Sugar cane farmers interested in utilising the software would soon be able to have it customised for their farm by SASRI experts.

Based on a presentation given at the 2017 Netafim Irrigated Sugarcane Conference held in Umhlanga, KwaZulu-Natal, from 6 to 9 November 2017.