Sugar beans: A good harvest against the odds

The problem with being a net importer of wheat

Climate change has had a negative impact on agriculture 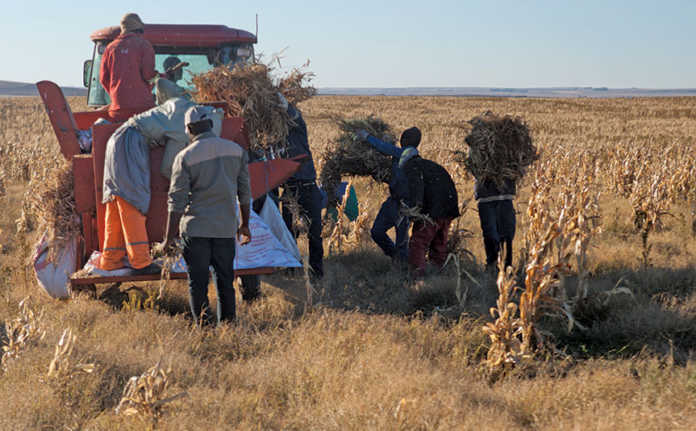 Shadrack Mbele has been getting good returns from sugar bean since first planting it in 2014. Sabrina Dean visited him in the eastern Free State to find out more about his production techniques, and how he brought this season’s crop back from the brink of disaster.

Shadrack Mbele was attending a meeting in Pretoria one morning in February when he received the phone call he had been dreading all season. His cropping manager and nephew, Champion Mbele, told him that a hailstorm had destroyed his entire sugar bean crop, which was uninsured.

“I just left my meeting and drove straight back to the farm,” recalls Mbele.

Looking at photographs of the sugar bean lands, it is difficult to imagine that anything could have recovered. The crop had been reduced to little more than broken stalks on the 80ha he had leased for the 2017/2018 cropping season.

Yet some months later, Mbele managed to achieve a harvest of 1,5t/ha, thanks to getting the right advice at the right time.

New to cropping
Sadly, his father died in 2012. But Mbele had the joy of planting his first maize crop in the same year and having a “magnificent harvest” in 2012/2013, averaging 7,6 t/ ha. He joined the ranks of the Grain SA 250t maize-producers’ club.

In 2014, he diversified into sugar bean, recognising its value as a crop. He says that despite its labor-intensive production, it can deliver good returns, especially with the price peaking at R18 000/t in recent years. Production and harvesting costs are much higher than for a crop such as maize, however. Mbele’s inputs are about R10 500/ ha and he adds to the cost by hand-picking his bean plants before they are put through the harvester. This, coupled with the stability of the World Food Programme (WFP) contracts in 2016 and 2017, has made sugar bean production a lucrative business.

Unfortunately, the 2017/2018 season faced challenges from the outset, starting with a delay in the payment of a production loan that had been approved.

By this time, Mbele had already found lands to lease, so he decided to finance his crop inputs from his own pocket. This was a huge risk, as he did not have sufficient capital to include insurance.

On top of that, the price of sugar bean dropped to R12 500/t, whereas he needed at least R13 000/t to make it worth his while. He was also unable to secure a WFP contract for 2018. (He has since overcome this obstacle by collaborating with other farmers to source another buyer in KwaZulu-Natal.)

Despite these challenges, Mbele managed to plant his beans before Christmas and they were progressing well until the dreaded phone call.